11/26 (Sat.) - 12/25 (Sun.), 2022
Opening Reception : 11/26 (Sat.) 6:00 - 8:00pm
*We are open on Wed to Sat. 12-7pm and Sun. 12-5pm
*Closed on Mon., Tue. and National Holidays
*Saya Okubo will be present at the opening reception on 11/26, Saturday, 6-8pm. The exhibition opens at noon before the reception.
Press release
PDF
WAITINGROOM (Tokyo) is pleased to announce a solo exhibition by Saya Okubo, “Box of moonlight”, her third solo exhibition at this gallery in two years. Okubo describes her work as “the act of exploring the existence and existence of things and people in two-dimensional space,” and creates paintings that coexist with two separate elements: symbolic images expressed as outlines, and phenomelal swells of images with a sense of materiality. The motifs represented by the contour lines are based on Okubo’s daily drawings of various parts of the human body and the various poses that humans perform on a daily basis. 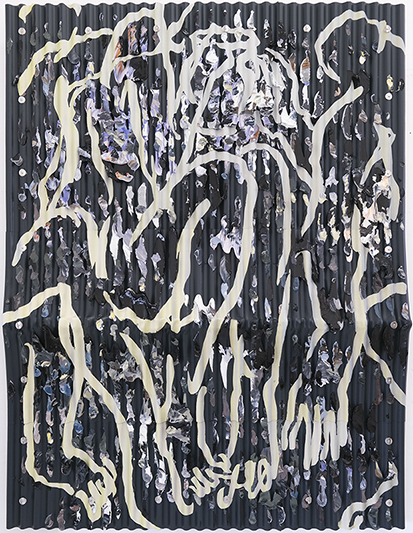 When Hitler was just a boy
Men and women talked to each other under the moon in Japan and Germany
One forgave the sins that were confessed
The other condemned unreservedly those who asked for forgiveness
When the world was on the brink of war
Asymmetrical forgiveness recounted on two moonlit nights
Shines down on me in the present, creating a vague outline

The motif of this work is “forgiveness,” as recounted in two stories. One is “Verklärte Nacht” (Transfigured Night) from Richard Dehmel’s Weib und Welt (Woman and World), published in 1896. The other is Konjiki Yasha by Kōyō Ozaki, which was serialized in the Yomiuri Shimbun starting in 1897, the year after Dehmel’s Weib und Welt was published.
Both works feature a scene in which a man and a woman talk about sin and forgiveness under the light of the moon. The sins of one are forgiven, while the other is rejected. When the background against which the stories were written is also included in the story, however, the relationship between sin and forgiveness is transformed to some degree. The moon, whose presence can be confirmed by the light from the sun, and the barely recognizable outline of the moon in its light are explored in “Box of Moonlight,” an attempt to represent the forms of sin and forgiveness as they transform within the space of a small box.

The irrepressibility of human beings that exist while various layers are separated and mixed together
The human figure in various poses, the lines of drawings that represent human body parts, the colors and abstract patterns seen between the lines, the solidity of the tin sheets, and the clumps of oil paint sandwiched between them — in Saya Okubo’s works, various elements overlap and exist with each other in thick layers. Depending on where the viewer’s attention is focused, these elements sometimes blend together, while appearing to be separate at other times.
In creating the new works presented in this exhibition, Okubo has taken motifs from two stories. In Richard Dehmel’s “Verklärte Nacht,” a woman confesses to a man as they walk in the woods under the moonlight that she is pregnant with a child from a stranger, but he forgives her. At the time he wrote this poem, Dehmel was having an affair with a pregnant woman even though he had a wife and child, so it was arguably none other than Dehmel himself who sought salvation under the moonlight. In Kōyō Ozaki’s Konjiki Yasha, also written around the same time, there is a scene in which a woman asks forgiveness from a man on a moonlit night, but he refuses, and she continues to regret her actions. In “Weaker than a Woman,” an adaptation of this story by Bertha M. Clay (Charlotte Mary Brame), the heroine is portrayed as an imposing woman, indicating that the woman in Konjiki Yasha is an incarnation of a lady from the Meiji era.
As Okubo says, “‘truth’ and ‘accuracy’ are always transformed in the individual who receives them.” The outlines of these human figures are drawn on the basis of habitual hand gestures and assumptions, while the abstract elements that disrupt them can be read and understood both individually and simultaneously. Moving back and forth between the three-dimensional and the two-dimensional, the figurative and the abstract, they coagulate and exist in a single work of art. We hope you will enjoy Okubo’s new works, in which she takes on the challenge of a new form of artistic expression in three dimensions while confronting the “irrepressibility” of human beings that gives rise to discrepancies and mistakes.
Artist
大久保紗也
Saya OKUBO