Waitingroom has moved from Sangenjaya to Ebisu in Fall 2010. Please see our new address and phone number below.

We are pleased to announce the first exhibition after our relocation, Hiroshi Yoshida Solo Exhibition “Drifting Landscape & Twisted Mystery” which will be up through November 20th to December 25th, 2010.

Yoshida was born in 1988 in Kyoto and is currently enrolled in the senior year, painting major, at the Kanazawa Collage of Art. He showed at the “Shinjuku Infinity” organized by Tokyo Wonder Site and Shinjuku Word in 2008, had the first solo exhibition, WORLDS, at waitingroom, won the prize at the Shell Art Awards, and participated in the art fair, ULTRA 002, at SPIRAL in 2009. In 2010, Yoshida participated in “No Man’s Land” at an old building of the French Embassy and have been broadening out his activities. This exhibition, Drifting Landscape & Twisted Mystery” is Yoshida’s second solo exhibition and will showcase his brand new paintings depicting a world of fragments and its reality.

The title of the exhibition includes Yoshida’s wish to “coherent the whole even if there are things that are different and fragmented in the world”. He says that it is more real that those scenes and stories that are all fragmented exist together and make one “drifting landscape”.

The new paintings, “A Religious-like Painting” and “Burn”, depict wide range of motifs and images burnt by the lightning in the desolated scene. Motifs were selected randomly and they were painted like a ceremony of the ancient religion. Goat, hay, and western paintings draw apart from primary meaning and historical value and burned by the lightning which is “something mystical”. Its landscape resembles Yoshida’s eye to the world and how he sees the moment in-between. 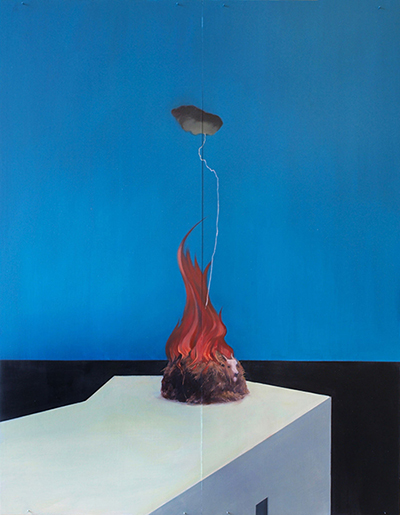