Due to the spread of the COVID-19 infection, there is a possibility that the duration of the exhibition and opening hours may be changed. We will announce the latest information on our website and SNS. We thank you for your understanding.

*Please refrain from coming to the gallery if you have any symptoms such as fever or cough.
*You may be asked to use a non-contact thermometer to measure your body temperature upon entering the gallery.
*Please wear a mask and disinfect your hands with alcohol at the entrance.
*Please note that if the gallery space is crowded, there may be a restriction on entry. 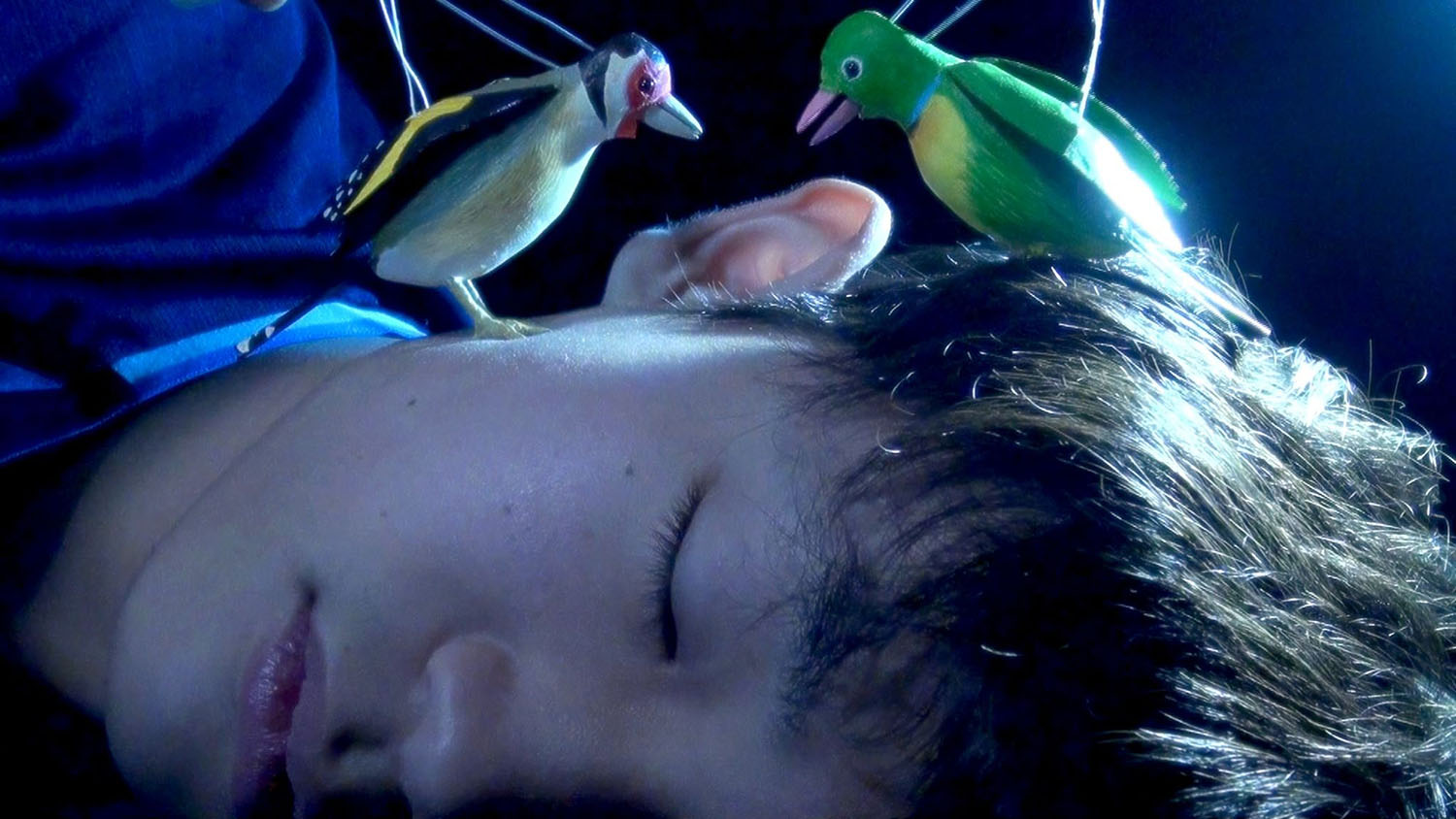 The destruction and rebirth by an artist dressed as Susanoo-no-Mikoto, who considers the Japan islands to be a soaring penis facing the Pacific Ocean, recalls the recovery from the Great East Japan Earthquake, from the work “JAPAN ERECTION” (2010). Not to mention “Cambrian Explosion” (2016) and “Dream Catcher” (2018), which suggest the endorsement of various gender differences and the collapse of prehistoric male chauvinism and systems, Fuyuhiko Takata’s works do not forbid straightforward sexual expression or the use of motifs reminiscent of genitalia, and while they are sometimes slapstick (*1), they also contain a sharp criticism of the spirit of the times behind them.
In the year 2020, when the spread of COVID-19 has forced us to rethink our conventional values, Takata has produced new works such as “The Princess and the Magic Birds” (2020-2021) and “1001 seconds” (2020). With these works, Takata will present “LOVE PHANTOM 2”, his first solo exhibition in two years at WAITINGROOM. 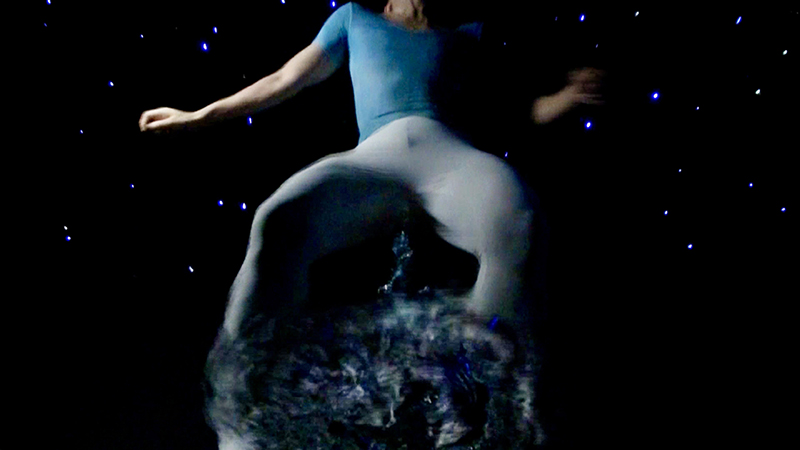 First of all, I would like to introduce “1001 seconds,” which symbolizes this exhibition. This work is based on the motif of Narcissus, a beautiful boy in Greek mythology who falls in love with his reflection in the water without knowing it is him, and finally loses his life. This tragic tale, which is the origin of the word narcissism (*2), meaning self-love and denial of others, reminds us of the distorted self-polarization through social networking services and selfies reflected on the mirror surface of smartphones, and even of ethnocentrism (*3), such as the trade friction between the U.S. and China and anti-immigration accelerated by the COVID-19 disaster.
The title, on the other hand, suggests the influence of “One Thousand and One Second Stories” (1923), a masterpiece by the novelist, Taruho Inagaki (1900-1977)(*4). In “Sense A and V” (1954), in which he discusses shonen-ai (love for boys), Taruho argues that sense A(*5) is “that small room isolated from the outside, a place where human beings should regain their original self there”(*6). He said, “In childhood, we are interested in the parts of our own bodies (i.e., the anus and buttocks), using enemas, rubber and metal medical devices as intermediaries, however, they are usually lonely, so they need a mirror, imaginary or real. Engaging in this mirror is called narcissism”(*7), also mentioning the acute “self-affirming” function of the A-sense.
Takata once used ink stains on his buttocks to create the video work “STORYTELLING” (2014), and performing the Rorschach test(*8) to maximize the unconscious in a “place where one should regain the self” may have been a foreshadowing of the work “1001 seconds”.
In the second half of the work “1001 seconds”, the scene changes abruptly with an explosive sound reminiscent of farting. This is the moment when we, who are watching the screen, come back to ourselves. It is as if the trigger that brings Narcissus back from the temptation of death after being seduced by his own beauty, or awakens us from our “exile to our home” under a declared state of emergency. However, as exemplified by the Roland Fart Master(*9) who served King Henry II (1133-1189) of England in the 13th century, and the “Farting Wife”(*10) who brings happiness in Japanese folklore, farting is not only an act of excretion, but also has the potential to be sublimated into a celebration or even an art form. From these things, it can be said that sense A has “an interest in intelligence, which has developed into a cousin of the arts and sciences”(*11). 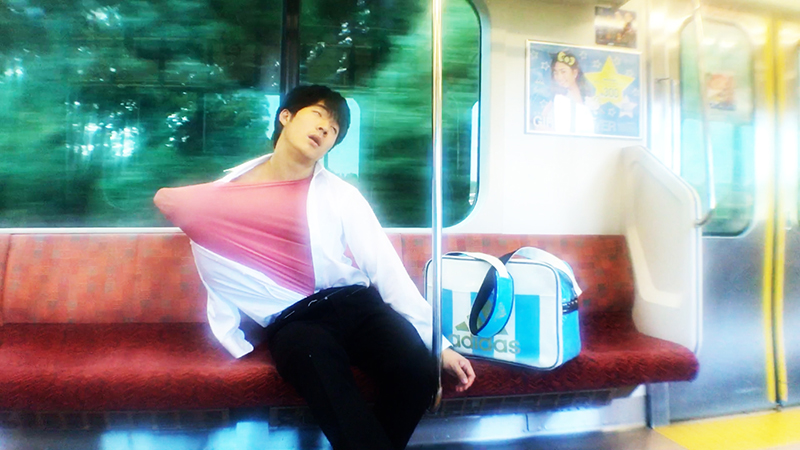 On the other hand, “Love Phantom” (2017), a video sketch-like work, reminds me of the relationship between Shinichi Izumi, the main character of the manga “PARASYTE” (serialized from 1988 to 1995)(*12), and the parasitic creature Miggy. Because of its simplicity of expression, the work strongly suggests a “symbiosis with COVID-19” based on Timothy Bloxam Morton’s (1968- )(*13) idea that “(the COVID-19) is an ambivalent entity that may be both a friend and a killer”.
What runs through the works mentioned above is the presence of a powerful “Song of praise for life” lurking behind the seemingly nonsensical laughter. This is because Takata’s works loudly proclaim the “Eros and Thanatos” (sex/life and death, the emotion of living and the impulse of death) that reside in each individual, which cannot be understood from the number of infected people and deaths that are updated daily like a digital counter.
At the time of writing, I have only been informed that “The Princess and the Magic Birds” (2020-2021) is a work that deals with adolescent sexuality. How will he portray the “monster” of secondary sexual characteristics in the body? I would like to look forward to the opening of the exhibition.
[ Notes on the above text contributed by Mr. Miyatsu ]
*1: Originating from silent films, it refers to comedies characterized by violent movements, exaggerated acting, and paroxysmal developments.
*2: A psychoanalytic term for the state of loving oneself or seeing oneself as a sexual object.
*3: Self-ethnicity and own cultural centralism. An attitude or way of thinking that sets absolute standards for the ethnic group or culture to which one belongs and judges or rejects other cultures as inferior.
*4: From the end of the Taisho era to the 1970s, he was a novelist who published a number of works on such themes as “model boy,” “celestial preference,” “desire to be an aviator,” and “abstraction of boy love. The novelist and critic, Tatsuhiko Shibusawa (1928-1987), highly praised “A-Sense and V-Sense,” in which he regarded man as a single tube from the mouth to the anus, as his own unique unified theory of eros.
Reference: Seigo Matsuoka “Taruho Inagaki – One Thousand One-Second Story”, October 29th, 2003
https://1000ya.isis.ne.jp/0879.html 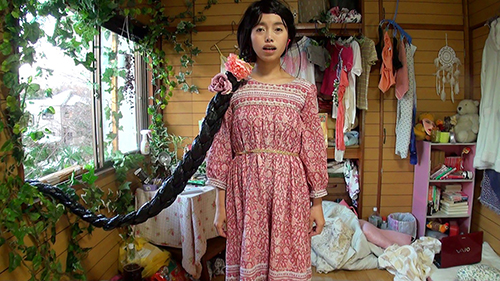 *5: Taruho Inagaki wrote about the A-sense (anus), the V-sense (vagina), and the P-sense (penis) in his book “A-Sense and V-Sense. In it, he says of each “The V is self-limiting as sex, but the A is not. Herein lies the inherent anguish of the V sense, which is burdened with the burden of reproduction, and the fatal misery of the A sense, which is never neglected except during defecation. So, what is P-sense? There is no such thing. This is because the V sense is separate from the A sense, and the further flip side of this V sense is none other than the P sense”.
*6: Taruho Inagaki “A sense and V sense”, “One Thousand One-Second Story”, 1969, Shincho Publication, p.382
*7: Excerpted and summarized by the author from “A-Sense and V-Sense”, p.392 of “One Thousand and One Second Stories”, above.
*8: A psychological test devised by Hermann Rorschach (1884-1922), a Swiss psychiatrist, in 1921. In this method, the subject is shown an ink stain and asked to describe what he or she imagines, and the thought process of the subject is estimated by analyzing the content.
*9: A fart master was a performer who was active from ancient times to the Middle Ages, using farts to create various rhythms and pitches. At the time, they were as prized as minstrels and harpists, and in medieval Ireland they were known as Bryghtoil.
Reference: William Langland, “The Vision of Piers the Plowman”, 2018, Hard Press 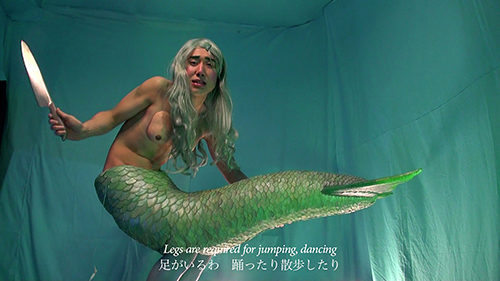 *10: On the way to take his wife back to his parents’ house after being accused of farting too loudly, she farted to help a stranded freighter and people who were having trouble harvesting persimmons, and got some clothes and a horse. (There are many other variations.) Similar stories have been told in Yamagata, Akita, Saitama, Oita and other places.
Reference: Junichi Nomura, Miyoko Matsutani, supervision “The Second Collection of Japanese Folk Tales to Tell for the Future (4) careless wife” 2002, Sakuhinsha
*11: “A-Sense and V-Sense”, p.392 of “One Thousand and One Second Stories” above
*12: This manga by Hitoshi Iwaaki, serialized in “Morning extra issue” and “Monthly Afternoon”, depicts the strange fate of Shinichi Izumi, a high school student who lives in harmony with a mysterious parasitic creature called Miggy that has come from outer space.
*13: American thinker and professor at Rice University. From his research on food and expression in British Romantic literature, he gradually approached environmental thought, and is now known as one of the advocates of Object-Oriented-Ontology. He is the author of “The Poetics of Spice”(2000), “Ecology Without Nature”(2007), “The Ecological Thought”(2010).
*14: The following is a reference and partial citation.
“The COVID-19 is not an “enemy”. A philosopher’s theory of “symbiosis” with viruses”, Forbes JAPAN, April 18th, 2020
https://forbesjapan.com/articles/detail/33797 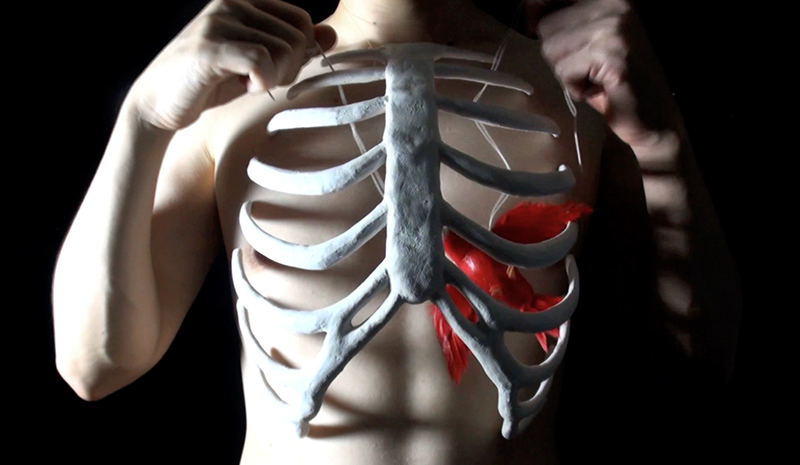 [Related Events]
Takao Kawaguchi Performance & After Talk with Fuyuhiko Takata
Date: 2/12 (Fri.), 2021 17:00-18:30   Free admission, reservation required
*How to make a reservation:
Please send an email to yoyaku@al-tokyo.jp with your name, number of people, and cell phone number with “2/12 Event” in the subject line. We will reply to your email as soon as it is received.
In order to avoid congestion, depending on the situation, we may have to ask you to stand or watch from outside the venue. Please note that a reservation does not guarantee a seat.
Details : http://al-tokyo.blogspot.com/search/label/1F%20Main%20Space