Naho Kawabe and Hanae Utamura’s video works (past works) were available online only during Art Week Tokyo.
In the exhibition, both artists presented installation works that combine multiple objects as main pieces, but both also create video works as one of the various media they use for expression.
Here are some of the works by both artists that were available online for the limited time of Art Week Tokyo. 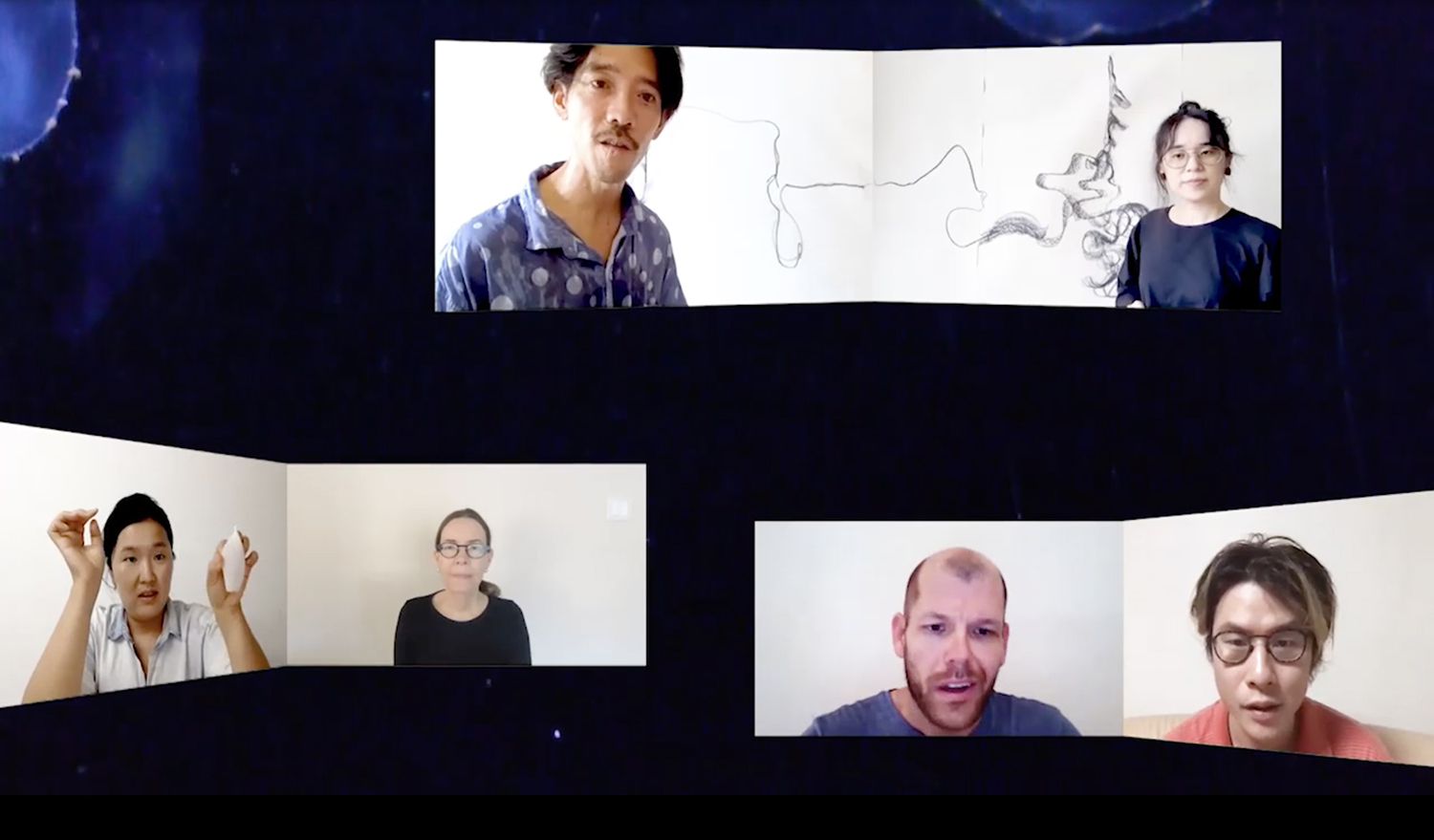 “Camera Isolata” was realized through a special grant for artists under the Covid-19 pandemic from the Hamburgische Kulturstiftung. The motto of this grant was “Art knows no shutdown“ and it supported projects that take an artist’s approach to a world that was under lockdown in 2020.
The Latin derived term “Camera Isolata“ characterizes a closed and isolated room – concretely and symbolically – an isolated space situation. Camera Isolata is the space in which we isolate ourselves during the pandemic. At the same time the modern use of the word Camera refers to an electronic optical device, the camera, often built into a computer or smartphone that produces a cut out of people’s upper half, taken from real space and cast into virtual space. This way Camera Isolata becomes an online space, forming its geographic centre somewhere under the ocean in submarine cables.
Kawabe invited six artists from far-flung places to participate in this project: Jane Brucker (visual artist, USA) , Miss Hawaii (musician, Japan), Henrik Malmström (photographer, Argentina), Setbyol Oh (light designer, Germany), Ziyun Wang (painter, China), Yohei Yama (painter, Vietnam). Three versions of the video of the “encounter” between the two figures were produced, and a version of all the videos played simultaneously is shown here. These six artists connected did not know each other personally before and did not know about their respective artistic focuses until they met through an online communication tool, only briefly informed about the rules of the game. 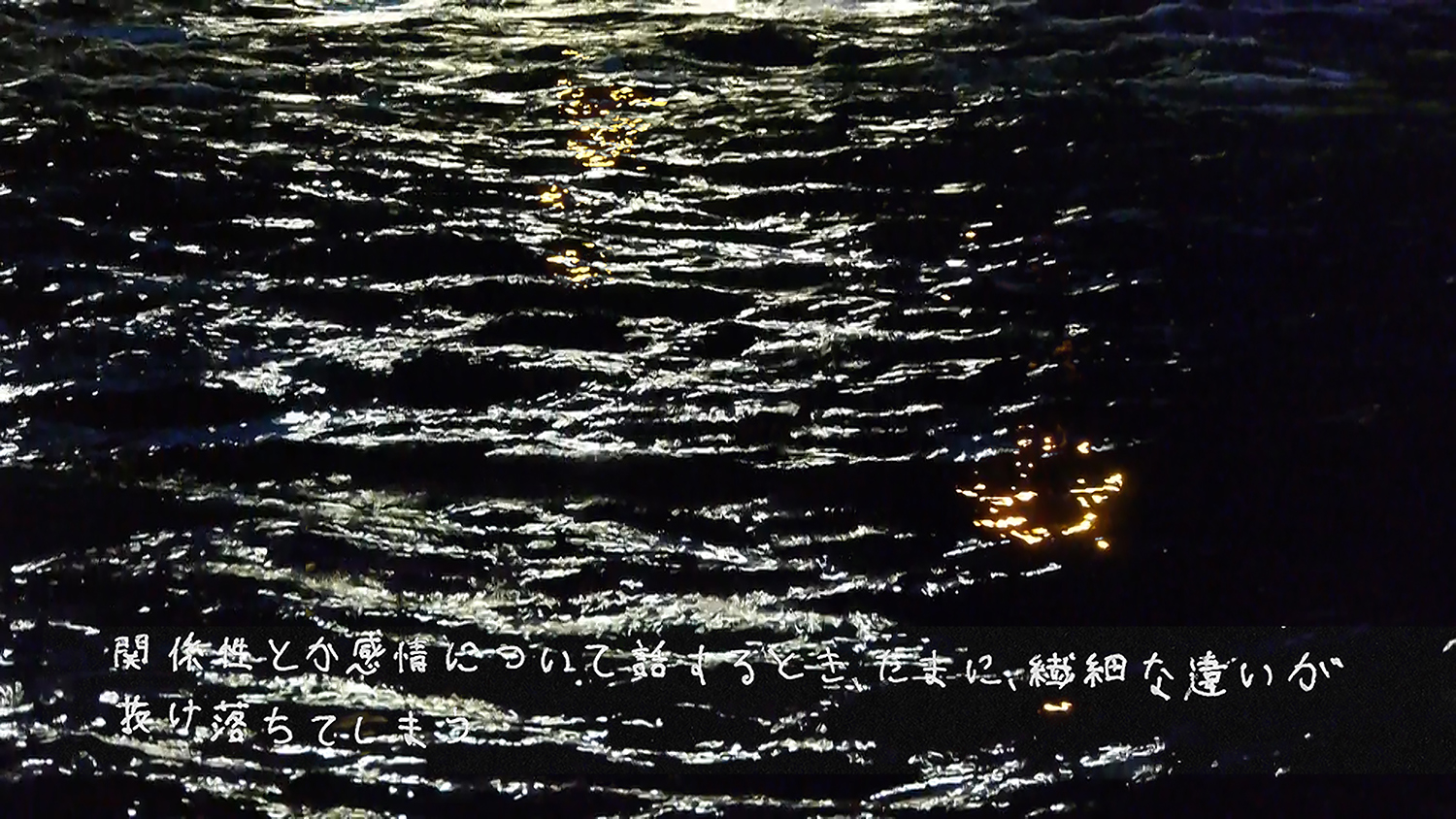 It shows the light in constant motion reflected on the surface of the water. The movement of the light is synchronized with the voices of artists who live in Hamburg but are not from Germany, who reflect on themselves as “outsiders” as they speak.
The German word in the title, Aufenthaltswahrscheinlichkeiten, which in quantum physics terms translates as “probability density function,” can be divided into two words: Aufenthalt/stay and Wahrscheinlichkeit/probability. Here and there. Simultaneous presence and absence. And the “residence status” of a foreigner is called Aufenthaltstitel in German. Anyone who does not have permanent residency is uncomfortable before going to a “foreigner’s bureau” to
apply for a visa. What is the probability (Wahrscheinlichkeit) of getting permission to stay (Aufenthalt)? If the smallest unit that makes up everything in the world depends on probability in the first place, does that mean that you and your destiny are also subject to probability? Can I stay? Or should I start packing?
The video is subtitled in Japanese by a Japanese person born in Germany, whose somewhat awkward Japanese echoes the imperfections of the artists’ German.

The artist filmed the process of putting together a small lump of charcoal into a single wooden form once more with a string by a woman who defected from the former East Germany in 1956. The voice is that of a woman who recalls what it was like at the time. By telling the story of “crossing borders” and the “everyday life of having borders” from one woman’s point of view, such as the coming and going of mail when Germany was divided and the story of her exile on a tram that crossed the east and west sides of Berlin, characteristics of an age, social issues, or even the mystery of life can be seen through. It also reveals that the boundary line is actually a mesh when expanded, and that there were daily routines of the inhabitants who slipped through it.
The title, “A true woman unties all the knots/Eine echte Frau löst jeden Knoten,” is a saying she heard from a West German high school teacher when she was a teenager. She was amazed at what a high hurdle it was to become a “woman.” She still recalls that impression at the time. 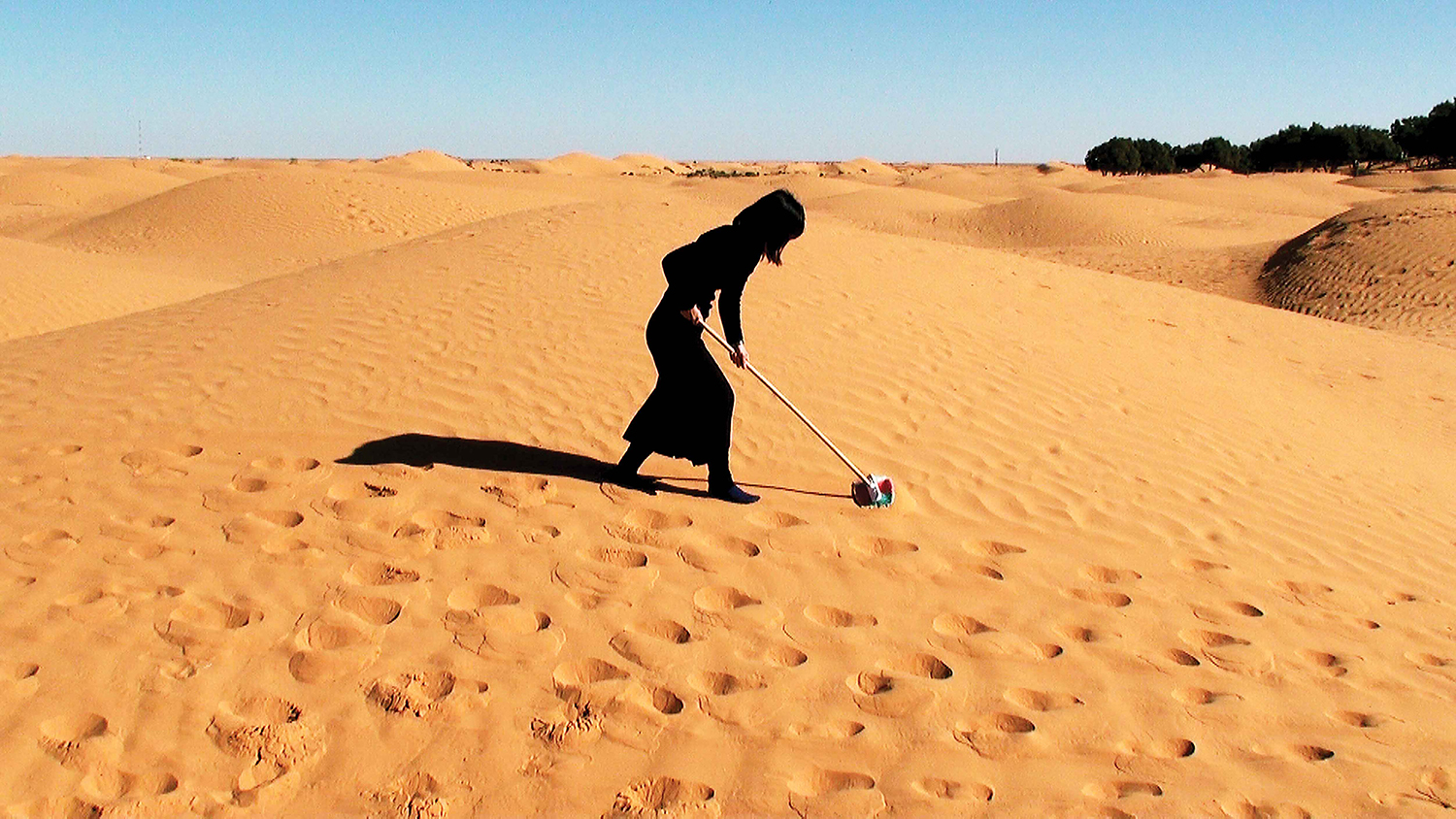 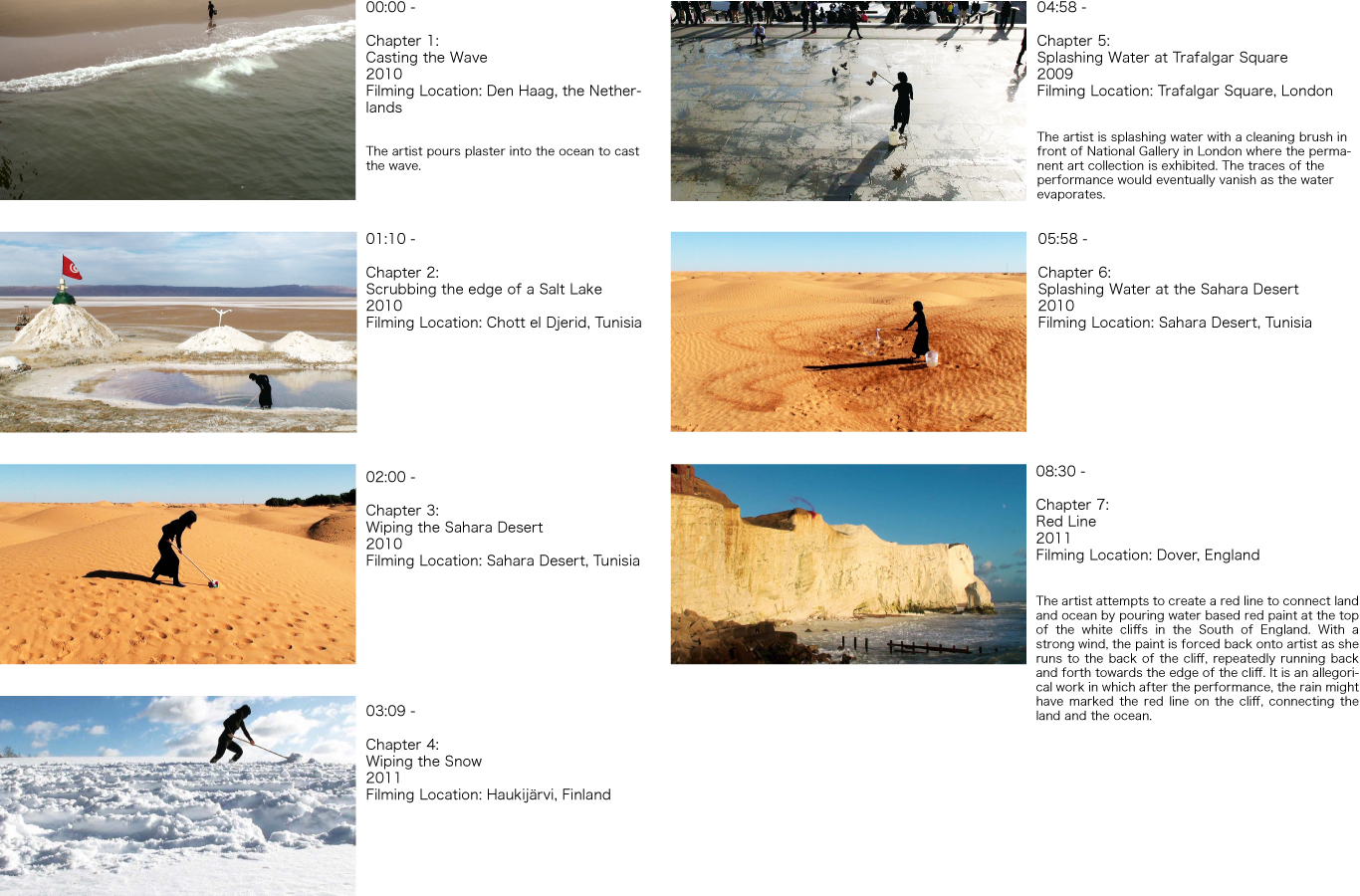 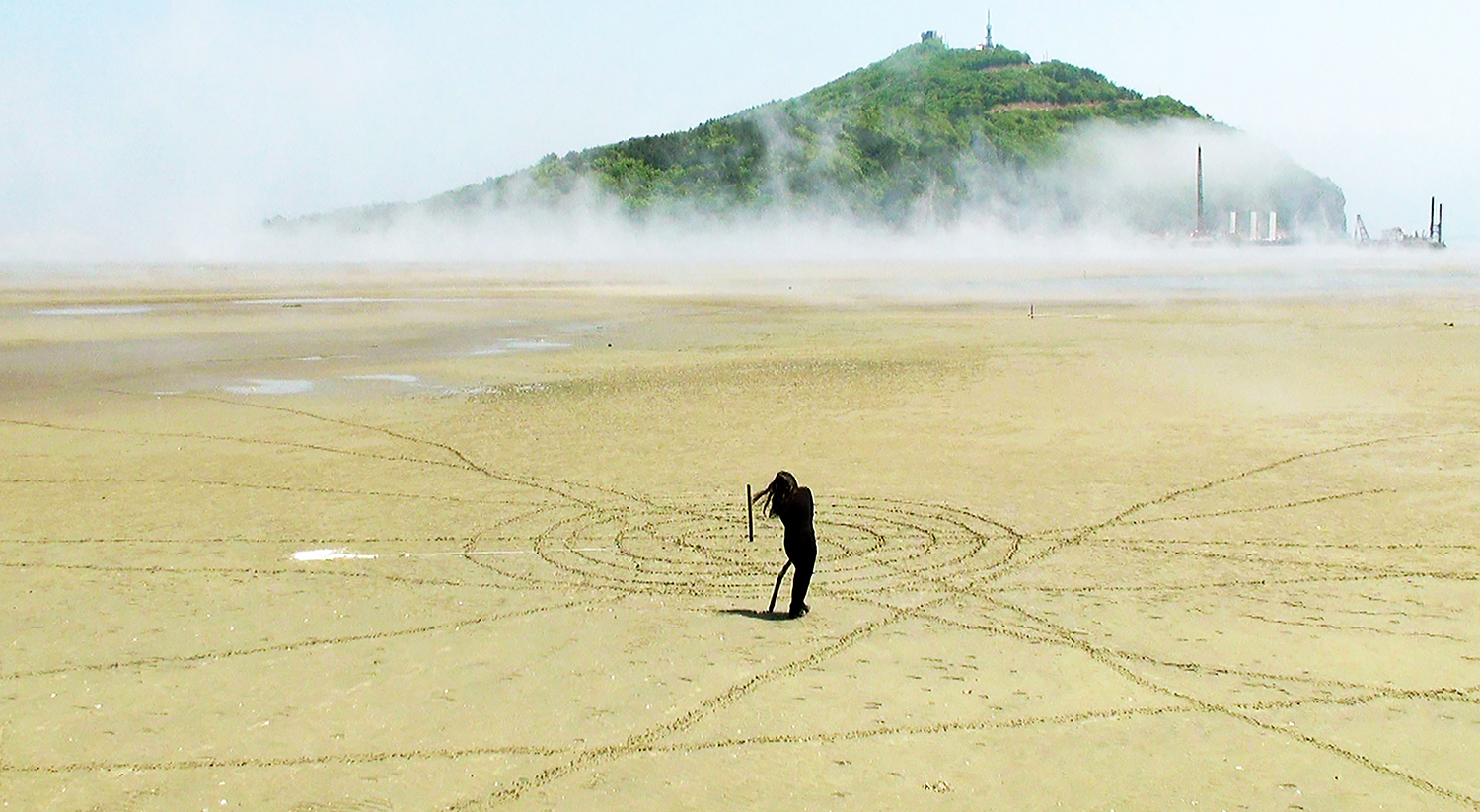 The performance video ‘when a line becomes a circle’ was performed at Baengnyeongdo island, one of South Korean islands closest to North Korea. The performance is based on conversations the artist had with islanders at Baengnyeongdo. The islanders recalled that the affect on their island after North Korea’s threat was similar to affect the earthquake had on Japan and the Fukushima nuclear power plant. Performed at a political site, the work contemplates the idea of ‘borders’, from a political realm to ontological level, and then to pure geometrical form, as the work proceeds through sensorial experience of visibility and sound.
The performance video consists of 3 actions around the pole in the middle, as a symbol of ‘being’. First, the artist draws lines resembling the border between North Korea and South Korea; then in the 2nd act, circles are drawn resembling the danger zone around the Fukushima nuclear power plant. The last action shows the artist drawing one big circle which goes out of the frame, so that only line is seen within the frame. But the sound of drawing the line can be continuously heard, so it is left up to the viewers whether lines are actually drawing the circle or not. The line can be read as division and the circle can be interpreted as reunification, vice versa in Fukushima’s case. The final scene shows the artist leaving the stick next to the pole. It resembles ‘human being’ in Chinese character which symbolizes 2 human figures supporting each other. 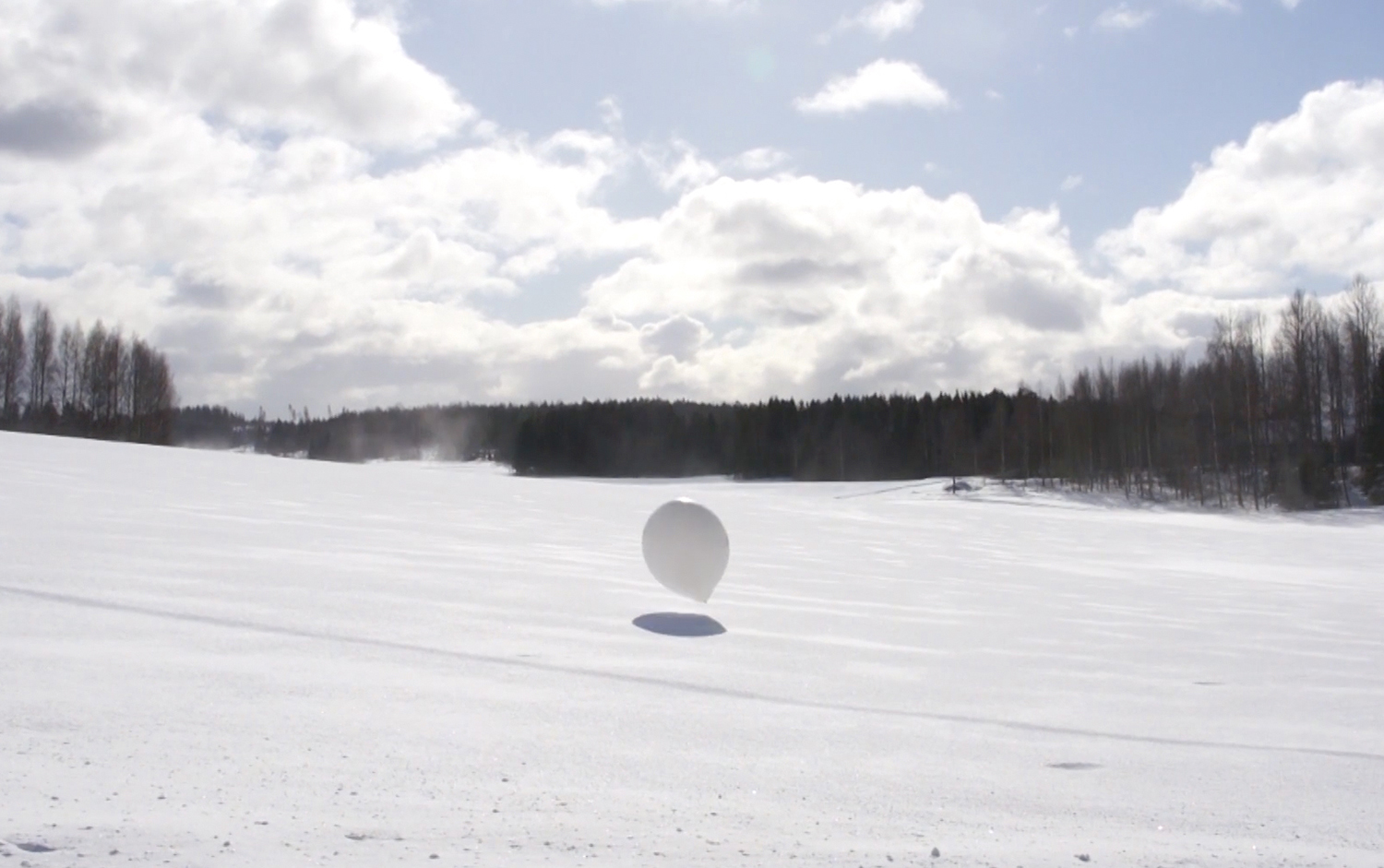 Duet of the Balloon and the wind.