*We are open on Wednesday to Saturday 12-7pm, and Sunday 12-6pm during the exhibition.
*Opening reception is from 6pm to 8pm on Saturday, January 13th, and the artist will be present.
*We are open from 12pm on the opening day before the reception.
Installation View
PREV
/12
NEXT
Works
/1
The missing shade 40-2
2017
gelatin silver print, 572 x 478 mm

Tokyo, Japan – WAITINGROOM is pleased to announce Saori MIYAKE Solo Exhibition, “THE MISSING SHADE 3”, which is the artist’s solo exhibition for the first time at our gallery. She has been depicting intimate relationship with our surroundings encompassed in the act of viewing images, expressing the stories, fragments, and multilayers of the images through an unique method of photogram based on the found photo. In conjunction with this exhibition, she is also participating in a group exhibition, “20thDOMANI / THE ART OF TOMORROW”, at The National Art Center Tokyo (1/13-3/4/2018) and will showcase a group of new works based on the photo albums, scrapbooks, books, and keepsakes of an individual, Mr. Y, at both venues.

Born in 1975 in Gifu, currently lives and works in Osaka. Graduated from Kyoto City University of Arts with the Master’s Degree in 2000. Her recent exhibitions include a solo exhibition “THE MISSING SHADE 2” (SAI GALLERY, Osaka, 2017), group exhibition “The Riddle of Art: Takahashi Collection” (Shizuoka Prefectural Museum of Art, Shizuoka, 2017), “ArtMeets04 Koichi TABATA / Saori MIYAKE” (Arts Maebashi Gallery 1, Gunma, 2017), group exhibition “La métis du renard et du poulpe” (CABANE GEORGINA, France, 2016), solo exhibition “THE MISSING SHADE” (FUKUGAN GALLERY, Osaka, 2015), “HER NAME IS ABSTRA” (DAIDO-SOUKO, Kyoto, 2012) and many others. She has received several awards including The Kyoto Prefecture Culture Prize for Effort in 2016, Sakuya-konohana award in 2013, VOCA Prize in 2010. Her works are included in several public collections such as Kyoto City University of Arts, MONT BLANC, Takahashi Collection and many others. It is the artist’s first time in 5 years to have a solo exhibition in Tokyo. 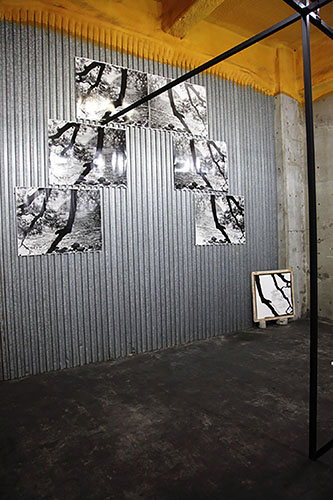 The title of MIYAKE’s series “THE MISSING SHADE” continued from 2015 is named from the “Shade=Shadow” that is said to be deeply connected to the origin of painting. The final image of her work seems either photography or painting, or even both. It is created by a unique method of photogram, tracing the image of a found photo onto a plastic film as negative and exposing them on photographic paper to make final prints. She says that the image emerged through this analogical process can make various interpretations behind the image possible, rather than pursuing photographic realism. She was given a collection of a person, Mr. Y’s personal effects, including photo albums, scrapbooks, books and keepsakes and created a new body of work, “THE MISSING SHADE 3”, as part of “THE MISSING SHADE” series that pursues the relationship between experience and sensation of viewing images from the perspective of painting.

Mr. Y competed in the 1936 Summer Olympic Games in Berlin, and was sent to fight in the Second Sino-Japanese war a year after that. While in the military, he met the Shakuhachi, a Japanese end-blown flute, and was awarded the title of Chikurinken, which only a handful of grand masters can obtain. Mr. Y then lived his life as a gymnastics instructor and Shakuhachi player until he died when he was 69 years old, experiencing a lot of overseas expedition and international exchange. Photographs and keepsakes left by Mr. Y which means the images once seen by him, were reconstructed organically as a result of thoroughly “viewing” again through the works of MIYAKE’s. After several times of inverting negatives and positives in the infinite gradation of gray in the gelatin silver print, the final image seems like offering the possibility of a new story seen from the intersection of personal experiences and collective memories. Because of evolution of digital age, diffusion of cloud, and trend of SNS, a lot of IMAGES are overflowed and bloated, and we are no longer able to see a value in each story in this era. However, the works of MIYAKE which focus on the act and experience of “viewing IMAGES” let us rethink indirectly or paradoxically about an interest to others, consciousness of temporarily and ambiguity, and sensitivity of giving the meanings.

In the exhibition “20thDOMANI / THE ART OF TOMORROW” (The National Art Center, Tokyo) happening at the same time, she selected pictures related to the days when Mr. Y was in abroad as motifs for the work, and in her solo exhibition at the gallery, she selected pictures from Y’s collection of other gymnasts’ images of Eastern European, The former Soviet Union, and also Mr. Y himself as motifs for the work. 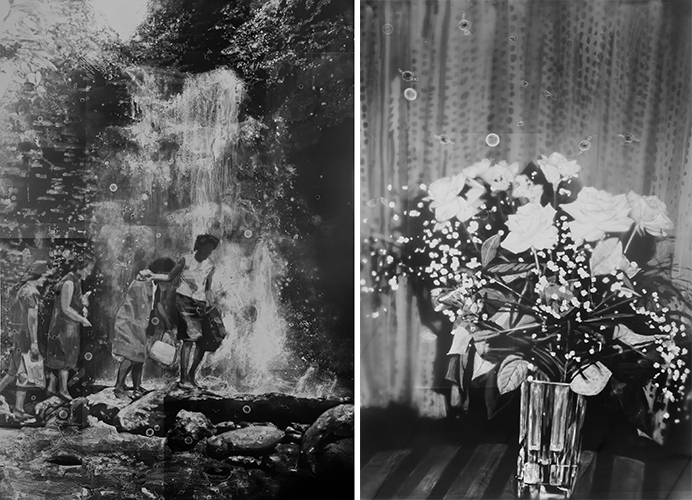